The Mandaic Book of John

As an update on the Mandaean Book of John translation project, let me share the news that a blog has been created for the purpose of posting completed drafts of both the typed Mandaic text and English translation of the Mandaean Book of John. It can be visited at http://rogueleaf.com/book-of-john/  Please keep in mind that, for the time being at least, what is posted are drafts and not final, polished, corrected and edited versions of either the text or the translation, unless otherwise specified.

Since the texts I will be talking about in my conference paper at the Society of Biblical Literature International Meeting in London in July, "The Reception of Lukan Infancy Traditions in the Mandaean Book of John," would be rather much for a "handout," hopefully it will be not only adequate but better to provide the Mandaic text and English translation online. Here are direct links to the relevant sections:

I will also make a copy of my paper available in due course.

(Cross-posted at Exploring Our Matrix)

As a result of Charles Häberl's hard work, an online Mandaic lexicon is now available.
It is a work in progress, both in terms of content (lexemes will continue to be added as they are encountered) and in terms of formatting. Nevertheless, those interested in the Mandaic language, more broadly in Aramaic, or in the Mandaeans and Mandaism, will certainly find it interesting and useful immediately!
Posted by James F. McGrath at 8:34 AM 7 comments:

Via the Mandaean Gnosticism blog, I learned that in addition to numerous other Mandaean texts, the Ginza Rba is online (in both Mandaic script and transliteration, and now it also has a Google site), and what's more, now so too is the searchable concordance to the Ginza Rba.
Posted by James F. McGrath at 9:00 AM No comments:

While the most challenging aspect of the Soulfisher that confronts translators is undoubtedly the colloquial nature of its vocabulary, it is also clear that the text has suffered somewhat in its transmission.

The term girita literally means "eel" (and this is in fact how Lidzbarski translated it) but the same name (in the form جري jirrī) is also applied to the Mesopotamian Catfish, Silurus triostegus jirri. In the previous line, the same creature is described as nuna ḏgirita šumẖ "the fish whose name is girita," but this does not necessarily clarify whether the narrator intended to reference a catfish or an actual eel. Its partner, the qusa, is likely another taboo animal, elsewhere paired with sarṭana "crab." Drower and Macuch identify it with Persian كوسج kawsaj or kūsaj "swordfish" but this requires that the following be read as "which leaps up on one's hand" (as they have) rather than "it rises on its hands" (as the preposition b- requires). I suggest the spider crab (Elamenopsis kempi) which is found alongside the Mesopotamian Catfish in the marshes.

Lidzbarski left the following line largely untranslated. This same line apparently also posed some difficulties to the copyists; Lidzbarski's Manuscript B has ḏbunnẖ sqa enina in place of the first three words. All translators of this passage have found the barbel (Barbus sharpeyi, a carp-like fish known locally as the بني bunnī) at the heart of the first word, but the rest of the passage is cryptic. I suggest that the eniana is not to be read as "response" (which does not make sense in the context) but rather as a back-formed singular of the word ainanata "eyes; knots." Likewise, the hapax sarkala appears to me to be a contraction of the verb sarik "he fastened" followed by the object marker elau. In B the initial u- of the following word is omitted. I am not certain that this is much of an improvement upon Lidzbarski's lacuna; although the relationship between the individual components of the line is clear, it unfortunately remains no less cryptic. 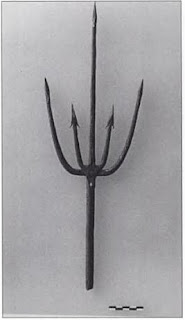 A cauf (kauara) is a type of basket or ventilated box which is submerged off the side of the fishing boat and used to transport live fish. Through metonomy, this word has also come to mean fish in general, but it clearly retains its original, literal meaning in this passage. The term brundia refers to fish in both Classical and Neo-Mandaic, although it is not clear whether it refers to a specific type of fish or is merely a synonym for fish in general. The word palta survives among the Marsh Arabs in the form فالة fālah, which refers to a kind of reed pitchfork, roughly 10-12 ft. long and tipped with a head of five iron spikes (see the image to the right). Although these terms caused some consternation to the translators, they were not, in fact, the chief obstacle to translating this portion of the text. That honor belongs to the following phrase, ualuai umitanun.

Lidzbarski translated kauaria brundia ualuai as "fish in bayleaves and aloe" on the authority of Père Anastase-Marie de Saint Elie, who reported to him that fish were sometimes preserved with bayleaves. Drower and Macuch translated these three terms as three types of fish, one big and one small, inferring from context, and appealing to the Persian term وال vāl "whale; large fish" I would prefer to read ualaui as uelauai "and to me" followed by aumitinun "I adjured them" as in the preceding line (and indeed Lidzbarski's manuscript C had umitinun in place of umitanun).

Another possibility is that ualuai stands for ueluai "and my spirits" and belongs grouped with the preceding "cauves of fish." In the following lines we read laramin silita ukauaria ualuai lalagṭia "they will not cast nets and take fish and my spirits(?)." Admittedly, Persian وال vāl could potentially fit in this context (in the sense of "cauves of large fish;" a proper whale would obviously not fit, in more ways than one). In the absence of further data, conjectures such as these must suffice.
Posted by chollie at 2:06 PM 1 comment:

The Soulfisher begins comprehensibly enough, but it is not very long before we start encountering problematic words:

The final word in this section, kalia, is a cipher. The word kalia usually means "hindrances" or "restraints", does not make any sense within this context, particularly since it appears to be parallel to ṣaidia. Drower and Macuch suggest a derivation from an Arabic word كلاء kallā'- meaning "riverbank" or "harbor," but this does not seem to fit the context either. Strangely, I cannot find this word in any of the dictionaries available to me. The word kiliata below, which is parallel to našbia "nets" and appears to be from the same root, suggests that this word refers to those who fish with nets rather than spears. According to Edward Ochsenschlager, the question of net-fishing vs. spear-fishing still divides the communities of the Iraqi Marshes; while most fishers use nets to catch fish, the Mi'dan reject them as unmanly, and prefer to fish with spears alone.

I know the watery marshes.
I recognize their inner trails and mounds.
I enter all the nets, pools, and pens.
I traverse the lagoon in darkness,
and neither does my ship pierce them nor am I held up.

The word hauria is clearly related to the Arabic word خور khawr-, which is synonymous with "gulf" or "(river-)valley" in the standard language, but in the dialects of southern Iraq refers specifically to the constellation of very shallow lakes that characterize the region. 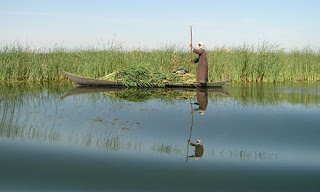 Given the similarity between the cluster hn and the letter ṣ in the Mandaic script, one might surmise that the hapax giṣia actually reflects a form like gihnia from a root meaning "to bend." Drower and Macuch assure us that a word of this root still appears in local usage, referring to the type of path trodden by water-buffalos as they pass through the reeds, which bent down by their feet and bodies. The word talilia is yet another hapax, which Drower and Macuch relate to Arabic تل tall- and Syric ܬܠܠܐ telālā.

The narrator then goes on to explain that he does not "pierce" našbia, hauria, and kiliata, and neither is he held back by them. The first of the three plainly refers to nets or snares; the third is likely derived from the same "restraints" mentioned above, leaving the second, which (as we've seen) also means a kind of marsh lagoon. It is likely that all three refer to different types of trawls and trap nets that might be damaged by a more careless fisher making his rounds.
Posted by chollie at 2:06 PM No comments:

Blogging the Soulfisher, Part I

The Soulfisher, or ṣaida ana ṣaida ḏmn ṣaidia bhir, nearly caused Mark Lidzbarski, the original translator of the Mandaean Book of John, to throw in the towel on the whole project. His frustration is palpable from the introductory comments to this chapter:

The section includes many expressions from the daily life of fishermen and sailors which are not otherwise attested in either Mandaic or other Semitic languages. For this reason, its interpretation is extremely difficult. I have made every conceivable effort to elucidate its many obscurities, but with few results.

In his frustration, Lidzbarski hit upon a possible solution:

Because technical terms that are typical of a narrow circle remain attached to the ground and pass from one language to another, I assumed that some of these terms survive even with the now Arabic-speaking sailors and fishermen of Iraq, and I was able to figure some out with certainty. Therefore, I made up some questionnaires, the first containing general questions about fishing and sailing in Babylonia, and the second containing a list of eligible words with their possible contemporary forms in Arabic.

Though brilliant and far-sighted, his project floundered when his attempts at securing responses to these questionnaires proved largely unsuccessful. Of course, Lidzbarski composed his translation around the turn of the century; in the intervening eleven decades, numerous advances have been made in the study of Mandaic, Aramaic, and the vernacular dialects of Arabic, as well as daily life in southern Iraq, and these advances have yielded resources such as lexicons and ethnographies that were not available to Lidzbarski. While the Soulfisher may be one of the most challenging of the sections of the Mandaean Book of John, it is also the one most likely to benefit from a reassessment.
Posted by chollie at 11:22 AM No comments: